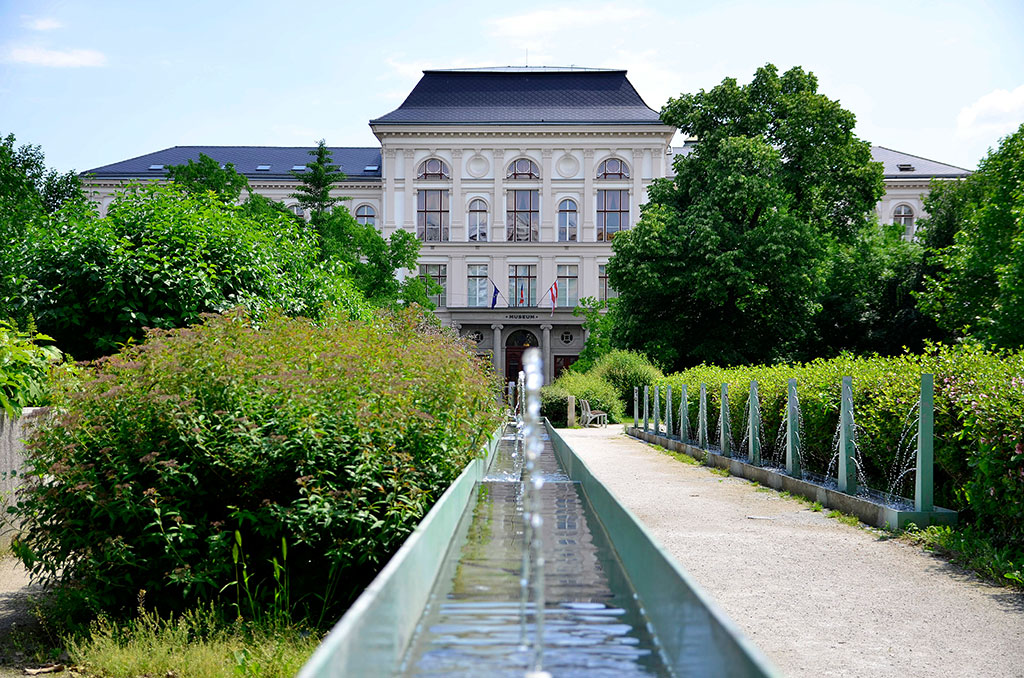 The museum in Ústí was founded in 1876 and the first exposition was opened in “Zlatá loď” hotel (Golden Ship) in Hrnčířská street (what is today “Na Předmostí” restaurant). However, already in a few weeks the museum had to be moved elsewhere and then again…; during the first ten years it was moved eight times.

The number of collection items and the reputation of the museum were growing and a dedicated museum building was becoming a necessity. In 1914 the municipality approved the building of a new town museum in Palachova street, near the Municipal park. However, the First World War wrecked this intent and in the post-war plight salvation was seen in the honourable gesture of the prominent Wolfrum family, Ústí’s industrial entrepreneurs, to donate the Trmice chateau for the museum’s needs. Nor the aristocratic seat became a permanent home of the museum. On the one hand it soon was not sufficient for the museum’s needs and, moreover, the long-time absence of any maintenance brought the chateau to the brink of total devastation in the 60’s. In 1971 there came another promise of a new specialized building of the municipal museum, to be erected in the Mírové square.  Again, however, a makeshift solution was preferred and in 1972 the museum workers moved to a neo-Renaissance school building next to the theatre. At first they lived together in the same building with pupils, later the former classrooms were occupied by the central post office. The museum merely played the role of a tolerated tenant. When the post office moved out at the end of the 20th century, a new question arose as to how to utilize the historic structure. Finally, there came a chance to set up a worthy municipal museum and with it a presage of yet another moving, hopefully the last one. For a short term the museum moved into provisional premises and in 2009-2011 a general reconstruction of the museum building was carried out by dint of a European subvention.  The new museum was opened to public in a ceremony in June of 2011.

How did the Imperial Hall get its name?

In 1876 His Imperial Grace probably did not have a notion that the Ústí council had just erected a new municipal school. By Ústí’s standards, however, this was a project of great historic significance. The monumental school building, conceived in neo-Renaissance style, was the most representative structure far and wide in its time. Having had no town hall of its own, the municipality had a pompous hall designed into the school building, intended for municipal council meetings and other prestigious gatherings. This was also reflected in the decoration, which included rich paints of walls and ceilings with allegoric themes and gold-plating. The school, extended in 1897 by an additional building to form an enclosed block, laid the foundations of the “Ringstrasse” in Ústí, a prestigious address full of sumptuous public palaces after the fashion of Vienna. Soon other buildings in the neighbourhood followed: the post office palace (1900), the municipal theatre (1909), and the municipal library (1912).

When on June 17, 1901 the Emperor Franz Joseph I visited the town of Ústí while on his travels through the Kingdom of Bohemia, there was no discord as to where the imperial audience with the prominent town citizens would be held. The building of what is today the municipal museum became, logically, the place of this exceptional event. Thus, in memory of this event the Imperial Hall was given its ostentatious name. As a pleasant chance would have it, the re-opening of the museum after the general reconstruction took place almost precisely on the day of the imperial visit 110 years ago. Thanks to an unexpected discovery of mural paintings and their meticulous restoration the public could see the Imperial Hall again in the form as seen by the Emperor Franz Joseph I. In addition, after decades the memorial plate reminding of the famous Austrian Emperor’s stay in Ústí nad Labem, removed after the war, was installed again in the entrance hall.

What is to be found in the Ústí museum?

During 1876 to 1901 the Ústí museum was taken care of by the local Industrial Association; then it was managed by the Museum Society until 1939. In the following decades the museum fell into competence of various degrees of state administration or self-administration. Since 1986 the museum has been subject to the political representation of the statutory city of Ústí nad Labem as an allowance organisation. At present the museum collections and book stock are property of the city of Ústí nad Labem. The museum adheres to legal regulations for administration of movable cultural heritage, for custody of collections of museum nature, and for public libraries.

Currently the Municipal Museum of Ústí nad Labem administers approximately 200,000 filing numbers of museum collection items and their files. It is responsible for circa 60,000 book units in the professional museum library, which also accounts for approximately 2,000 volumes of old printed matters and manuscripts.

Among the largest sets are the collections of natural science, which originate as early as at the end of the 19th century. They contain numerous and significant files documenting in particular the nature of North-Western Bohemia, Bohemian Central Uplands and the Ore Mountains. There are thousands of geological specimens of minerals, rocks, and paleontological records. There is also a herbarium, entomological files are particularly ample, there are attractive zoological collections with numerous interesting specimens. In conjunction with building development in the historical centre of Ústí nad Labem in the recent decades the archaeological collections have grown as well. The historical collections contain for example tens of thousands of photographs, negatives, lantern slides or postcards. There are also military collections, for example an extraordinary collection of weapons and military material from the period around 1813 when the battle of Kulm took place near Ústí. In regards to the industrial character of the region the technical collections are ample. Fine arts and handicrafts are represented by historical furniture, glass, collection of late Gothic xylography or landscape painting of the 19th and 20th century. The number as well as the quality of the collections has the Municipal Museum of Ústí nad Labem among the most significant regional museum institutions in the Czech Republic.